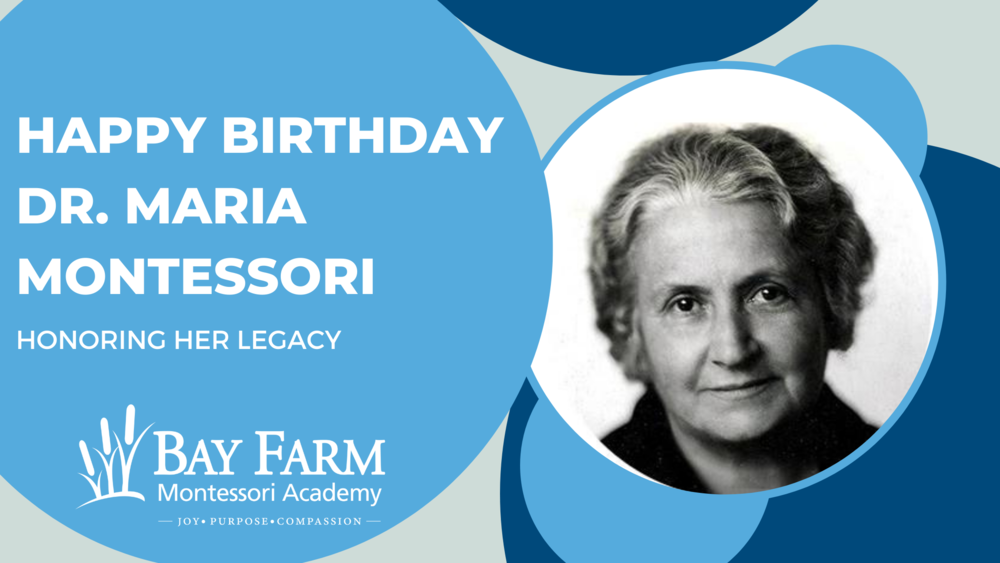 To honor Dr. Maria Montessori’s birthday on August 31, we want to reflect back on her life and her profound influence on how we see and honor children’s potential.

Many educational systems start with adults having an idea of what is best for children. The Montessori approach, however, began with Dr. Montessori being intensely curious and observing children’s growth and development.

It’s worth remembering that Dr. Montessori was first and foremost a scientist. In fact, Dr. Montessori was one of the first female physicians in Italy in the late 19th century. Specializing in pediatrics and psychiatry, she had regular contact with working-class and poor children through free clinics at the University of Rome’s medical school. Through these initial experiences, Dr. Montessori theorized that children are born with incredible learning potential and an intrinsic desire to explore, discover, and learn about their world.

In 1900, she was appointed director of a University of Rome program for developmentally delayed children considered uneducable. After observing the drab conditions of the institution and the children’s attempts to find anything of sensory interest, Dr. Montessori began studying the importance of sensory experiences in cognitive development.

She then spent two years teaching the children and directing the work of teachers in the institute. Eventually, Dr. Montessori’s developmentally delayed students were able to pass the standard tests of Italian schools. Her response? She stated that if children with developmental challenges could pass the tests, the traditional schools of the time should be able to get dramatically better results with typically developing children!

In 1907, Dr. Montessori had her opportunity. She was invited to coordinate daycare in the slums of San Lorenzo for working-class children too young for public school. Dr. Montessori began by teaching the older children how to help with everyday tasks. She also introduced practical skills of everyday living, including hygiene and self-care. Gradually, Dr. Montessori incorporated manipulative puzzles and activities to assist children with learning different skills and concepts. The children were drawn to the materials and reveled in the process of beautifying themselves and their surroundings. Each day the children’s behavior improved, and they eventually begged her to show them more, including how to read and write.

As she prepared the space and the adults supporting these previously unkempt, unruly, and uneducated children, Dr. Montessori saw an incredible and seemingly spontaneous kind of learning and work happen. The children became calm and peaceful. They took care of themselves and their surroundings. And they developed concentration and a love of learning.

Dr. Montessori was fascinated. Building upon her previous work, she continued to experiment and design unique learning materials that nurtured children’s natural desire to learn. News of this success in San Lorenzo soon spread through Italy and eventually dignitaries from other countries began visiting to see this miracle firsthand.

Around age 40, Dr. Montessori left a doctor’s career and a professorship at the University of Rome to continue her work for children. Throughout the rest of her life, she offered courses and lectures, wrote books, and trained educators, all the while insisting that the focus be on children, rather than on her.

Because Montessori education is focused on the science of human development, the approach has withstood the test of time and culture. Today the Montessori approach has been implemented in approximately 20,000 Montessori schools around the world, with more than 3,000 in the U.S. alone. With over 100 years of practice, Montessori has worldwide recognition as an educational approach that helps children achieve their fullest potential.

We invite you to learn about how Bay Farm carries out Montessori's practices and philosophy.  Request information here.