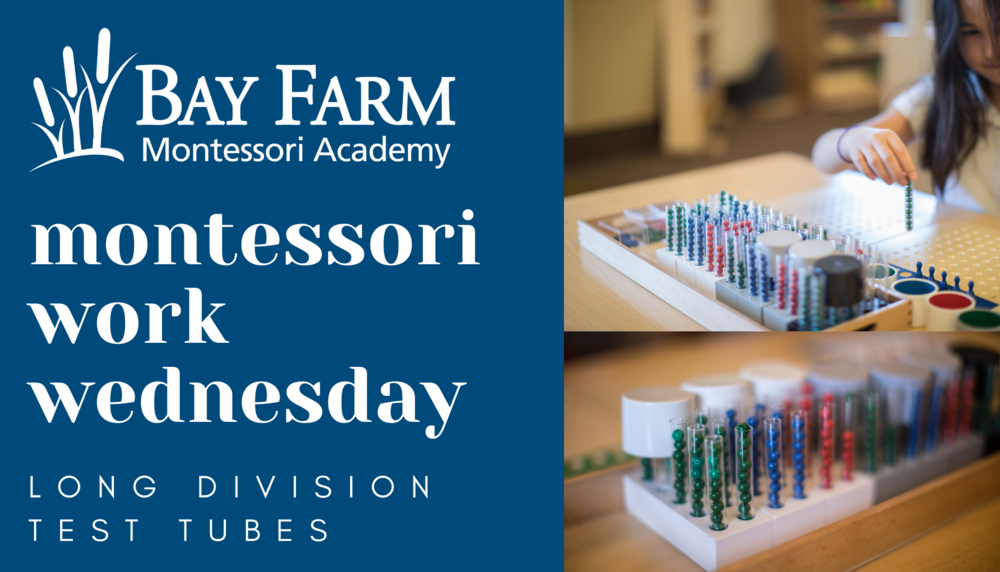 Racks and Tubes, The Test Tubes - they may go by different names, but they’re all the same: a detailed Montessori division material. Introduced to the child somewhere around the end of Elementary I or beginning of Elementary II, the tiny parts are appealing. Adults who have had an opportunity to see the Racks and Tubes used are usually delighted by the way this physical material is able to help children understand more deeply how numbers are manipulated during division.

This is something so much more than when we learned with paper and pencil. Of course, that is taught simultaneously, but having the material makes everything make more sense.

A whole lot more complicated than math materials the child has previously used, there are many components, including:

The color scheme of green, blue, and red being representative of units, tens, and hundreds is repeated throughout many Montessori materials. The child will have already seen this when using the stamp game, bead frame, and checkerboard materials.

As an example, we will refer to the division problem 9,764/4=2,441. We begin by laying out the green board. The other boards will not be used for this problem, because the divisor (4) is only one digit. Larger problems require more boards (more on that later).

To represent the divisor, we will take out four green skittles and set them into place at the top of the board.

The first four racks are all we will need for this problem, so we will take those out along with their corresponding cups.

At this stage in their mathematical development, students are expected to record their work in their notebooks consistently, so you would notice the child writing the problem down and filling in the answer as they go.

To begin solving the problem, it’s all about even and fair distribution. Starting with the thousand cup, beads will be placed beneath each skittle, one at a time, until all the beads are used up. The only catch is, the distribution cannot have any remainders (until we get to the last step with the units). This means that beneath each of the four skittles there will be two beads, with one left over.

By now, the child will be fairly proficient in exchanging across place values. They will know that one thousand is equal to ten hundreds, so the lone thousand bead will go back in its tube and ten red hundred beads will be added to the hundred cup.

The distribution continues with the hundred beads. After careful placement of each bead, there will be four underneath each skittle, with one leftover. This one hundred bead will be exchanged for ten ten beads. This means there will now be 16 blue ten beads in the cup, which distributes evenly. The last step leads the child to distribute just four green unit beads, with one under each skittle.

The answer to a division problem is always what is found in one of the equal and fair groups, or what the child can count up underneath one of the skittles. In this case: 2 thousands, 4 hundreds, 4 thousands, and 1 unit, giving them the answer 2,441.

When it comes to long division and completing more complicated problems with larger divisors, the racks and tubes are both elegantly and downright complicated. Reading a step-by-step description is not nearly as exciting (or clarifying) as seeing one completed in person. We strongly encourage you to observe this material being used in our elementary environment when you’re able.

Beads to correspond with 71,326 would be distributed into their corresponding cups.

Here, the child would pause and note how many hundred beads are beneath one of the unit skittles. This number is recorded on their paper, as it is part of the final answer.

The problem continues with cups sliding to new spots and beads being exchanged as needed. The distribution continues until the problem is complete.

This may all sound horribly tedious to an adult reading about it, but we can promise you it’s absolutely thrilling to the child who is discovering these number processes for the first time. We can also reiterate the fact that by using their hand to manipulate physical materials, the child is giving their brain visual scaffolding in which to solidify their understanding of division.

As we mentioned above, the very best way to see the magic of this special material is to watch it being used in person. We know that’s not always possible, but when you do have an opportunity, we think you’ll be just as amazed as we were the first time we saw it.

Questions? Want to learn more about the Montessori approach to math? Contact us any time. Communication@bfarm.org