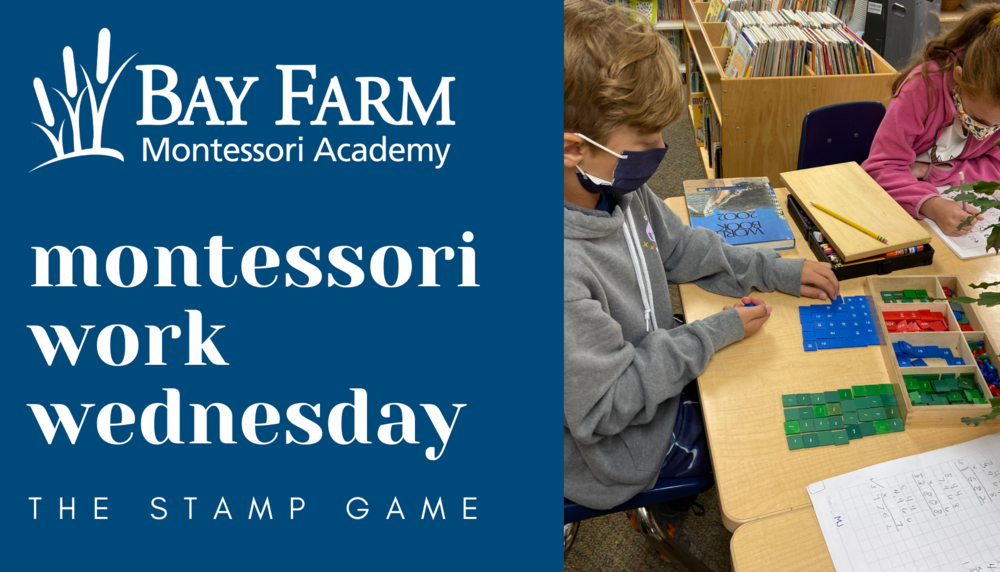 It’s Montessori Work Wednesday! Each Wednesday we like to feature a Montessori Work Material to help parents who are curious about what goes on in our classrooms. This also gives a unique insight into Montessori principles and how the method was developed in the first place.

Today we talk about the Stamp Game. A beloved math material that is used by children sometime between their kindergarten and second-grade years (depending upon their readiness), it allows young children to add, subtract, multiply, and divide using numbers into the thousands. Using a material such as the Stamp Game allows children to learn a concept in concrete terms, rather than abstractly (which is what they will be doing when they eventually complete the same types of problems with just pencil and paper).

Think back to when you learned basic math computations: it was very likely done abstractly, and you memorized what must be done when your numbers added up to more than ten in one column, or you needed to borrow some from the next column, and so on. Being taught that way certainly gets the job done, but what we are effectively doing then is teaching children to memorize the process.

Using a material like the Stamp Game allows children to physically manipulate the numbers in a way that provides a deeper and richer understanding of mathematical processes. Instead of feeling tedious and confusing, the Stamp Game provides a stepping stone that makes them excited to discover the secrets of numbers and operations. Many Montessori children have reported that as they get older and find themselves working on much more complicated math concepts, they still picture the movement of the tiny stamps in their minds. They have a lasting visual image of what the numbers are doing as they work; it’s not just rote memorization.

Please bear in mind that prior to being introduced to this material, the child will have a solid understanding of place value, as well as the basic concept of adding numbers. These skills will have been gained through other Montessori materials that were carefully developed and intended to be used in a specific sequence.

So let’s get down to the important part: How is the Stamp Game used?

A child or small group of children will be seated on the floor across from their teacher. A work mat will have been unrolled, and the teacher will stand up, walk across the room, and carefully select the material from the shelf, carrying it carefully to the work mat. Even this small action has a purpose: the teacher is modeling behavior by showing the child where the material can be found and where it is expected to be returned, as well as modeling how it should be carried around the room.

When the box is opened, the teacher may ask the children what they notice. They may comment on the colors of the wooden tiles: green, blue, and red. They will notice the small numbers printed on each tile: ones (units), tens, hundreds, and thousands. They may even notice little pegs that they will use much later when they use the same material for division.

The first step is to learn how to make numbers using the Stamp Game. The teacher will either have a pre-printed card or perhaps a dry erase board to write a number such as 3,721. They will then demonstrate by taking one green unit stamp out of the box and lining it up neatly on the rug in front of the compartment it came from. This will be followed by two blue tens tiles, seven red hundreds tiles, and three green thousands tiles. (The color pattern begins to repeat because much later, using a different material with the same colors, the child will learn about number series and why we separate larger numbers with commas. The idea is being introduced indirectly long before it is expressively taught.)

Students will then take turns making numbers. If the concept takes some effort, this may be their work and their practice for several days or weeks. If they seem ready for more, the teacher will move on to the next step.

An addition problem will be presented. The children will learn the terms addend and sum and will make each addend, separated by a space or perhaps a pencil, on the work mat. The teacher will then slide the bottom of each column of tiles upward, creating a single line for each place, as illustrated in the photo above. Starting at the bottom of the units, the tiles will be carefully counted and recorded in the proper place wherever the problem is written down. This will continue with the tens, hundreds, and thousands.

At first, the problems will have been carefully selected so that there is no need for exchanging. Once the child is ready for more of a challenge, they will learn that if there are ten unit tiles, they will need to be gathered up, deposited back into their compartment, and exchanged for one tens tile. They will learn to say aloud to themselves, “Ten tens is equal to one hundred,” and so on.

The lesson will end, and if the teacher feels the children have grasped the concept well enough, they will be expected to use the material regularly and independently (or with a friend) to complete problems. The teacher will periodically check in to observe and determine when mastery is achieved.

Whenever the child is ready (which could be weeks or even months), they will learn how to use the Stamp Game for subtraction. Again, the first problems will not involve any exchanging of numbers and will simply be a way to understand the basic process. You can begin to imagine the many steps and complexity of each Montessori material. When subtracting, the child will lay out the minuend, slide down the subtrahend, and find the difference.

Multiplication comes next. Children learn that all multiplication is making the same number a specific amount of times. They will see its connection to addition, as the process is very similar.

As for division, the teacher will introduce tiny wooden cups - one for each place value. Children look at the dividend and put the correct amount of tiles into the cups. They will then use the wooden pegs mentioned earlier (called skittles as they resemble bowling pins), to mark the divisor. Rather than lining the tiles up beneath the compartments, they now learn to line them up beneath the skittles. They learn that division is about being fair and that it is the only operation in which we start by using the largest number available rather than starting with the units (ones).

It can take an entire year (or longer) for a child to move through each of the steps described. The teacher will keep a close watch on each individual’s progress, and provide them with more of a challenge as soon as they are ready. When a child has fully exhausted their learning with the Stamp Game, they are ready to move on to a slightly more abstract math material: the bead frame.

It’s amazing to see the Stamp Game in action and we look forward to the day when we are able to have parents observe in our classrooms again. If you have any questions about the various materials found in Bay Farm classrooms, please reach out.